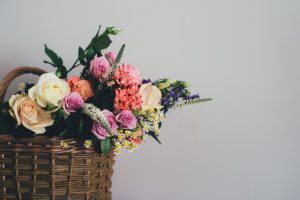 Recently, a friend shared about a very personal experience she’d had and it has really stuck with me. Her mother-in-law, “Rosalie” had been living with dementia and cancer for the past few years. For the better part of the last year, whenever my friend and her husband went to visit, Rosalie wasn’t very engaged.

There were times where they asked God to end her suffering, and understandably, questioned His timing. But they didn’t know the reason and therefore, they continued to trust God – putting their faith in His timing.

Just a few weeks before she shared the story with me, they received a call from the care facility where Rosalie resided. They were informed that she was nearing the end and since they live 360 miles away, that they should come to say “good-bye.”

After making the drive they arrived in Rosalie’s room. She was no longer coherent and had labored breathing so they knew the end was near. While they sat at her bedside many of the care team stopped in to say hello and to check on Rosalie’s failing condition.

At least half-a-dozen of them shared how much Rosalie had meant to each one of them. One young woman shared that whenever she came into the room, Rosalie would sing to her, “You are my sunshine,” and how it made her feel so special.

Another person shared that whenever she was in the room tending to her daily needs, Rosalie would stand up and do a little dance. And yet another woman shared that Rosalie had been her best friend throughout the past year, which she said had been especially difficult. She told them that she had lost both a sister and her mother, and that Rosalie’s faith and words had been such a strong source of comfort for her.

Lastly, one of the cleaning girls shared that she routinely came in after her shift and had tea with Rosalie. She said that Rosalie taught her to be humble and to love even people who are difficult to love.

A little more than 24 hours later Rosalie slipped away. Because she was a woman with a strong faith they were confident she had been welcomed home in Heaven.

My friend later shared that she and her husband had been very surprised to hear how active Rosalie had been. It turned out that at the very same time they’d questioned the reason for her lingering, she was serving a tremendous purpose; Rosalie’s faith was impacting many other people in ways they couldn’t have imagined.

This story has really stuck with me. It is a vivid reminder that we must avoid the mistake of thinking we know best; we can and must trust that God is never in a hurry and yet His timing is always perfect. (Ecclesiastes 3:1-8)

-Alicia Economos (Author of the book: Taking The Stage)
https://www.amazon.com/Taking-Stage-declutter…/…/ref=sr_1_1…