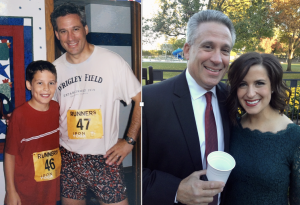 Recently, I launched the Wholehearted Living program for men. Consequently, for much of the past year, I’ve been researching more about what sons need from their fathers; exactly what they need to grow up into loving, confident and faith-filled men.

Since yesterday was the second Father’s Day since my husband, Ted, passed away from pancreatic cancer, I couldn’t help but reflect upon the type of father he was. One of the most important roles he poured himself into, was to be an active, hands-on dad to both our daughter, Kristin, and our son, John.

Ted loved reading to the kids, singing or dancing with them and making up fun games for them to do – like “kick the can” as they swung on the backyard swing set.

Ted grew up with two other brothers and had his own experience playing baseball and basketball, so he coached John’s teams for several seasons. In addition, he attended every soccer game and track meet that John participated in. He was a life-long fan of the Chicago Cubs and the Iowa Hawkeyes, so he took the kids to Wrigley Field and spent many Saturday afternoons watching a game at Kinnick Stadium.

However, it didn’t really matter what they chose, for he was completely attentive and supportive of anything our kids participated in. He spent hours helping them practice for their roles in mock trial; he attended every dance recital Kristin every performed in and was maybe one of the biggest cheerleaders for both of them when they participated in the Urbandale Show Choir.

Ted also had a great curiosity about life and was always up for an adventure. Whether that was running in the DAM TO DAM event or driving Kristin to Florida for a college internship, belting out songs at the top of their lungs the entire drive – he loved every minute of being together with either one of them.

By his words and actions, he demonstrated to both kids that he loved them, valued them and believed they were capable of doing great things – all things that every child needs to know from their father.

He also found the ideal balance between discipline and loving kindness – which can be challenging as a father. They always knew they could talk with him about anything and because of that and a million other reasons, Ted left nothing behind other than fantastic memories of their time with him.

Although Ted wasn’t perfect (for only God is the perfect father), he sure was an outstanding one – and we miss him every day.
Share
Subscribe to Blog