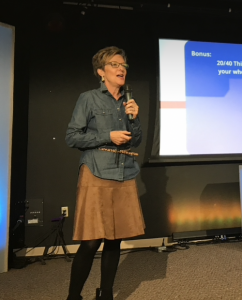 Thomas Edison’s teachers called him “too stupid to learn.” He made 3,000 mistakes before he invented the lightbulb. Eventually he held 1,093 patents.

Louisa May Alcott was told by an editor that she would never write anything popular. More than a century later, her novels are still being read, and the Children’s Literature association considers Little Women one of the best American children’s books of the past 200 years.

What does this have to do with YOU – and me? Everything.

Despite what others may say about you – or to you – the most important voice is the one in your own head. To live your best life you must learn to train that inner voice to be a supportive ally, rather than your biggest critic. You must also declutter your beliefs about who you are and what you’re capable of.

For me, that included the belief that I was too talkative. Have you met me?! I’m an energetic, enthusiastic person and YES, I’m quite comfortable talking – whether to a few friends or to an audience of hundreds.

As I learned to declutter my beliefs and develop a healthy relationship with myself, I discovered my passion and purpose; I began to share the message of living wholeheartedly through – of all things – public speaking.

Whatever your dreams are, I’d invite you to dig deeper and get rid of the clutter that causes resistance to pursue them. The world needs you and what you have to offer. Anyone that would tell you differently is wrong – just don’t let that person be you.